The Eugene-Kathmandu Sister City Association promotes mutual understanding and friendship between the people of Eugene and Nepal through events, delegations and fund-raising. A volunteer organization of Nepalis and Americans who love Nepal, we welcome participation of all. 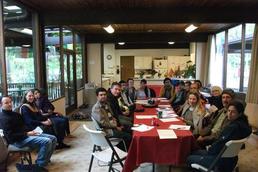 ​Eugene’s Sister City relationship with Kathmandu was established in 1975 by Mayors Les Anderson of Eugene and Babu Ram Regmi of Kathmandu. Another key participant in the early years was Professor Hugh Wood of the University of Oregon, who helped establish the Education Program at Tribhuvan University in Kathmandu. Hundreds of Nepalese students attended the U of O for higher studies as a direct result of Dr. Wood's involvement. Many of them went back to Nepal to become government officials, university professors, and community leaders.

The Eugene-Kathmandu Sister City Association (EKSCA) has been involved in projects and programs focused on community development, education, and public health.

For the past 10 years, the EKSCA has focused primarily on infrastructure projects such as municipal solid waste management. In July 2014, six local experts in waste management and recycling went to Kathmandu for a 10-day study of the Nepalese waste stream. The delegation has produced recommendations to Nepalese governmental bodies and private industry on finding value in garbage through recycling, bio-gas production, or composting.

Following the April 25th earthquake in Kathmandu, the EKSCA raised $30,000 for relief efforts. The donated funds went to agencies that are on the ground and delivering aid. ​

Mission: To establish a sister-city connection between Eugene and Kathmandu through fundraising, events, and delegations.

Questions or want to learn more?